Cider is a wonderful drink with an incredible tradition. Grey & Gold Cider is proud to be a part of  the re-birth of cider making in Ontario. We are a sustainable, farm-based cidery in the heart of Grey County apple country. We invite you to visit our orchard-side bottle shop to taste our unique variety of ciders and take home a bottle or growler. Or visit our online bottle shop to get our cider delivered to your door.

Our philosophy and process

We believe our role as cider makers is to guide and facilitate the natural process of fermentation with minimal intervention. We start with heritage apples grown locally in Grey County and press and ferment once a year after harvest. We allow our ciders to ferment slowly over months, not days or weeks, resulting in a cider that develops greater varietal character and complexity. We don’t use sulphites or commercial yeasts, allowing wild, native yeasts to do their work.

When we do add anything to our cider, it’s all natural and all local. Whether it’s sumac, or chamomile and other wildflowers, or the spruce tips that go into our award-winning Spruce of the Bruce cider, it’s all grown or foraged in the fields and hedgerows of our farm and the surrounding area.

From our farm to your glass.

After working for 30 years behind a desk, I was looking for something new. I wanted a new career that would get me out from behind the desk, out of the city and into nature. I wanted to do something creative; to do something that would bring people joy and leave the world a better place (at least in some small way). I wanted to be part of a supportive community of like-minded folk.

On a trip to Prince Edward County for some cycling and wine tasting, my wife, Kim and I made a visit to County Cider. I had a notion. A couple of weeks later, I tasted my first West Avenue cider. It was an epiphany. I wanted to be able to make cider like that.

I went online and learned that the ancient art of cider making was having a resurgence in Ontario. I wanted to be a part of that renaissance.

I made my first batch of cider from store-bought apple juice. It was terrible. But I didn’t give up; I doubled down. I read Claude Jolicouer’s The Cider Makers Handbook from cover to cover. I had found my bible. I went to the Ontario Fruit and Vegetable Conference where Claude and Chris Haworth of West Avenue Cider were speaking. Claude signed my book. Over lunch I chatted with Chris and Tom Wilson of Spirit Tree Cider. I was a 55-year-old fan boy but they were so open and supportive. I had found my community.

I bought an apple grinder and built a small press according to Claude’s instructions. I bought twenty used 20-litre carboys on Kijiji from a series of older European men, mostly forced to give up their winemaking hobby by their doctors and/or wives. Then I rented a U-Haul trailer and drove to the Beaver Valley and bought 1,600 lbs. of apples from T & K Ferri Orchards. When I told them that I was planning to drive the apples down to Toronto and load them into my basement to grind, press and ferment, they thought I was crazy.

The commercial presses that make our juice today could grind and press those apples in an hour – it took me several weeks on my little press. I had Macs, Golden Delicious, Gala and Honeycrisp apples, some I fermented as single varietals, some I blended; I tested a dozen different yeasts. I followed Claude’s instructions to control the speed of fermentation through racking. I bottle-conditioned some of the ciders; some I force-carbonated in a used corny keg. Some I left bone dry and unfiltered. Others I filtered, pasteurized and back-sweetened. I kept notes. I learned allot. 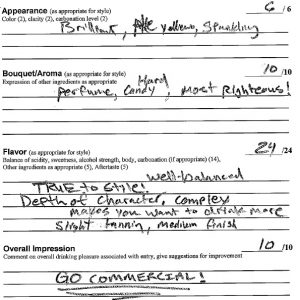 In the end, most of the cider was drinkable. Some of it, I thought, was very good. I entered a couple into the non-commercial division of GLINTCAP, a large and well-respected International cider competition held in Grand Rapids, Michigan. Months later I went online to learn that one of my ciders had won a Gold Medal. Later, I received digital copies of the judges’ scorecards with their comments. One of the judges, Dave Takush of 2 Towns Cider in Oregon, had given my Modern Girl cider a perfect score. He finished his comments with this exclamation:
GO COMMERCIAL!

And so here we are.

Happy #internationalwomensday Thank you to all th

We love having dogs at the cidery. Usually they ju

Sorry folks but we’re closed today due to the lo